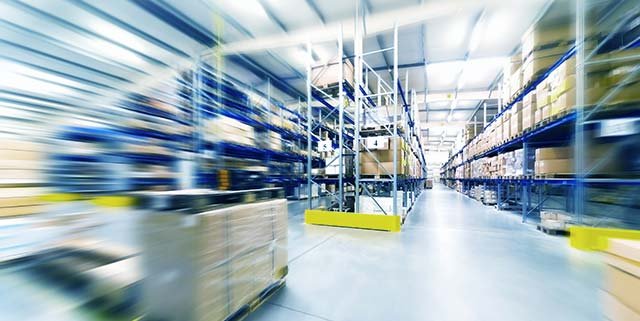 From the Bundesstraße 71, which runs a few metres away, it is hardly visible when a construction vehicle is not driving through the field of vision: Maimed is growing. Not just a little, but strong and upwards as well. The storage capacity is to be increased by three halls and thus more than twice the current floor space. The number of pallet spaces will almost tripled, from 10.000 to 27.000.

In addition to the current building stock with the 1,500 square metre administration building and two high-bay warehouses, each with a floor area of over 3,800 square metres and a ceiling height of 10.55 metres, there are two further high-bay warehouses with the same basic dimensions, one also 10.55 metres high. The adjacent hall will be 5.20 metres higher and will be used as a shuttle warehouse for handling large quantities of goods. Robots will also be used there in the future. At 850 square metres, the third new hall for a hazardous goods warehouse will be much smaller. According to Dirk Pfemfert, the company, which specialises in the manufacture and sale of dressing materials, protection, care and hygiene products, plans to invest six million euros in the expansion of its logistics centre located between the towns of Brochdorf and Delmsen. Pfemfert is the managing partner of the company, which after its foundation in the mid-1990s initially had its headquarters in the industrial park Siemensstraße in Neuenkirchen. There the capacities were exhausted after several expansions. After a long search for a location, it was decided to move within the community to the newly created industrial estate Robert-Koch-Straße. In 2009, the two halls were put into operation and the office and administration wing moved into. The client expects the construction to proceed quickly. According to Pfemfert, the AGS Planungsgesellschaft (Visselhövede) has already provided for expansion possibilities during the planning phase for the first construction phase and these have been described in the documents. After initial preparatory work in December 2017, the building permit from the district was available at the beginning of the year. Since then, the civil engineers of the Schröder company in Schneverding have been well involved in the preparation of the subsoil. The dimensions of the project and the requirements placed on the construction necessitate extensive ground works. If the weather permits, the first foundations will be cast in February. Completion is planned for late summer, so that the new halls and the hazardous goods warehouse can be gradually put into operation by the end of the year. “Then we will have urgently needed storage capacity, which will enable us to continue on our growth course. According to his boss, Maimed is an important employer and economic factor for Neuenkirchen with 74 employees – “from trainees to university graduates” – and a turnover of around 30 million euros – around 80 percent of which in Germany. This position is to be strengthened with the expansion. According to Pfemfert, this is also a commitment to Neuenkirchen as a business location. This is where all the threads of the company come together, which markets its products predominantly in Europe in 32 countries. Pfemfert anticipates ten to twelve additional positions, particularly in logistics and administration, which will soon be filled – which should not be easy. After all, there is a great need for skilled workers. There you are in competition with other companies in the logistics sector, which is strongly represented in the region. Ergo: “We have to be attractive as an employer.

Defibrillator for Mühlenhof
Scroll to top

We may request cookies to be set on your device. We use cookies to let us know when you visit our websites, how you interact with us, to enrich your user experience, and to customize your relationship with our website.

Click on the different category headings to find out more. You can also change some of your preferences. Note that blocking some types of cookies may impact your experience on our websites and the services we are able to offer.

These cookies are strictly necessary to provide you with services available through our website and to use some of its features.

Because these cookies are strictly necessary to deliver the website, refuseing them will have impact how our site functions. You always can block or delete cookies by changing your browser settings and force blocking all cookies on this website. But this will always prompt you to accept/refuse cookies when revisiting our site.

We fully respect if you want to refuse cookies but to avoid asking you again and again kindly allow us to store a cookie for that. You are free to opt out any time or opt in for other cookies to get a better experience. If you refuse cookies we will remove all set cookies in our domain.

We provide you with a list of stored cookies on your computer in our domain so you can check what we stored. Due to security reasons we are not able to show or modify cookies from other domains. You can check these in your browser security settings.

We also use different external services like Google Webfonts, Google Maps, and external Video providers. Since these providers may collect personal data like your IP address we allow you to block them here. Please be aware that this might heavily reduce the functionality and appearance of our site. Changes will take effect once you reload the page.